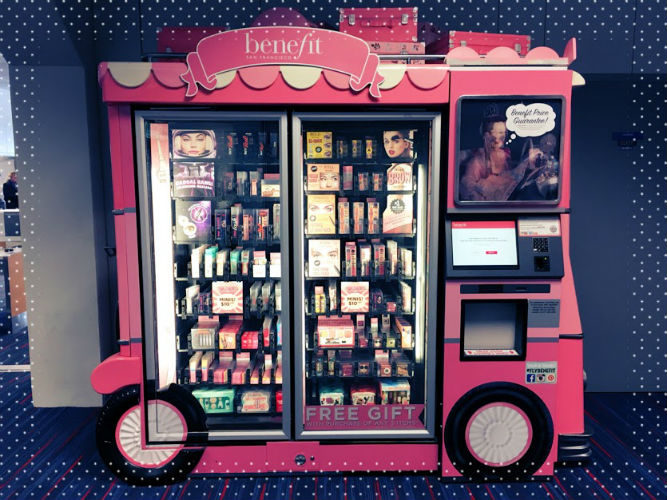 I’m back from New Mexico, and happily back home—not that I didn’t love New Mexico, I adored it, but nothing beats being in your own bed.

Now, I’ve done a lot of travelling in my life.  I’ve been flying since I was 4 years old, from Detroit to Albany, New York, to visit my grandma.  I’ve been from San Francisco to St. Louis to the Narita Airport in Tokyo, yet this was the first time I’ve ever encountered something so innovative and unique: a vending machine filled with makeup instead of food.

machine filled with Benefit cosmetics.  To be honest, I at first thought it was a little cupcake stall—don’t judge, I was mad hungry.  When I got closer though, I realized it was filled with makeup, both full and travel size.  Despite my years of travelling, I have never seen one of these before!  Honestly, it was amazing.  To treat myself after having a lot of flight issues, I decided to buy myself something from the machine to see how it worked (and because I love Benefit).  I originally wanted to nab myself some new eyeliner, but they were sold out, so instead I grabbed a dual-liner lipstick in the shade “Lusty Rose”.

Just as if I was getting a candy bar or bottle of soda, the machine grabbed my lipstick, dropped it into the slot for me to grab it and gave me a receipt, and that was that! Quick, easy, and stylish.

I couldn’t even wait to get home to try it out, so I giddily unwrapped it and swatched it on my wrist, haha.  I eventually tried it out later on my lips, and it actually gave my lips a fuller appearance—not that they really needed it.

I honestly think that having more of these makeup vending machines (for more brands, not just Benefit) would be an amazing step for the future.  It’s extremely nifty, and is also a great way to catch eyes for brands that may be just starting up!  As I’m only in the beginning stage of my travels, I am hoping to see plenty of more in the future!  Have you all purchased from a beauty vending machine?  If so, let me know!